The UARS Satellite is falling to earth: Here are 10 things YOU should be MORE worried about…

So NASA’s UARS Satellite is falling towards our planet: Earth. I’ve noticed that quite a lot of people are scared of what’s going to happen when it enters our atmosphere. First thing is first, you have nothing to be scared about. UARS is going to burn and break up hard as it enters our dense and friction generating atmosphere at high speed.

There’s a reason that when space shuttles re-enter our atmosphere, they have to be built to withstand extreme pressure and extreme heat. UARS is protected again shit all. UARS isn’t falling ‘down’, it’s entering our atmosphere at a near horizontal, arc-like route. It’s effectively ‘skimming’ our atmosphere and has been programmed to come out of orbit at a point where it will just fall into the ocean. The chances of you being hit? 1 in 21 TRILLION. You’ve got more chance of being stuck by lighting. On that note, I would like to present you with a list of 10 things that you should be MORE worried about, as it’s more likely that these things will happen to you:

So there. Don’t panic. Everything listed above is more likely to happen to you than you being worried about the UARS satellite.
Have a nice day now!

Lather, rinse and repeat. Keep away from eyes and out of the reach of children. The chances are high that England is just trying to let us know, that it tried it’s best to fight winter. The reality is – winter never left. I give you Demotivational Monday: English Summer Edition. 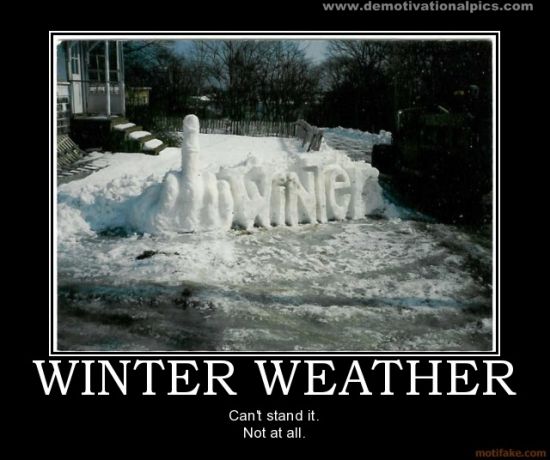 Demotivational: So How About This Weather

It’s hard to ignore the shear uprising of hacking related activity in the past weeks. PlayStation Network being the most notable, being crippled for a month and disabling online activity for many millions of PlayStation 3 units around the world. Then came the onslaught of Sony’s other websites and networks.

Then came the rest of the attacks. Let’s take a quick rundown of the hacking that has taken place by LulzSec over the past month:

Just yesterday, LulzSec have published 20,000 email addresses and passwords to the public, giving the average user access details to Facebook accounts, GMail accounts, PayPal to name just a few… these are the type of people we are dealing with here.
The NHS was recently sent an email from LulzSec (click the link to the left to view) regarding discovered security holes in their network – and the NHS turned them away when they wanted to help.

LulzSec go on to say:

In a response from the NHS:

This is a local issue affecting a very small number of website administrators. No patient information has been compromised. No national NHS information systems have been affected. The Department has issued guidance to the local NHS about how to protect and secure all their information assets.

Jesus fucking Christ. What a bog-standard response from some IT administrator cunt that is clearly too proud of his network to admit they have problems and accept help in plugging the holes that the NHS are exposing for all to freely abuse. This in itself shows what is wrong with the people at the “top” of the system. Similar examples of this are seen all over the news where people who are relatively high up in whatever organisation they belong to believe they think that they know everything – but in actual fact, they don’t.
What fucks me up even more, is that the NHS stated (as above):

The Department has issued guidance to the local NHS about how to protect and secure all their information assets.

I can pretty much guarantee that this is just a small email sent to all the satellite IT administrators around the country that either went totally unregarded, not taken seriously or ended up in the Junk mail box. As someone who used to work with NHS (anonymised) patient data, I know exactly how easy it is to obtain it.
LulzSec have clearly stated that they do not consider NHS to be an enemy and that their work is admired, however I hope someone in the NHS takes the polite notice about their security holes seriously… for the sake of all the unsuspecting patients that have used the NHS system, and for the sake of all the other nations in the world that are willing to pay considerable fortunes to obtain this data.

I wish I could have plane food every day. Yes, you didn’t read wrong, I did just actually say that. 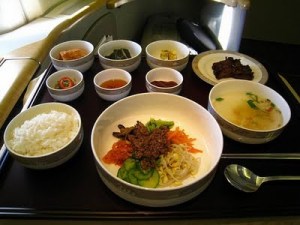 It upsets me every time when I hear someone talking about plane food, then followed by “Ewwww, ugh, fucking plane food. It’s so horrible. I’d rather vomit and put it in a tub, take it on the plane, then when the food comes round – say to them that it’s OK, because I brought a tub of my own vomit to eat instead of the food you are about to serve me”.

Granted, plane food is not what it used to be 20 years ago, and if your sitting in last class (economy) – the presentation isn’t going to be amazing, but it is still made to a high standard in a controlled environment by professionals who know and are qualified to make food én mass. This process is no different than it would be in, say, a mid-level restaurant or a diner chain, and is significantly more trust-able than your local Chinese takeaway, greasy spoon or Indian takeaway – not forgetting the likes of KFC and McDonald’s. My father always told me that due to the pressure and atmosphere, the large majority of passengers 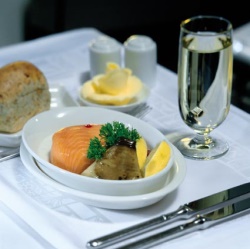 have their taste buds affected causing them to taste less whilst in the air. Since remembering this on every flight, I’ve always enjoyed (in comparison to the negativity that is projected) plane food, reminding me of quality ready meals found in the likes of ASDA and Tesco. You’re also provided with bread, butter, fruit and a dessert.

I can understand that some people may have had bad experiences with in-flight meals, but I can’t help feel that some people are genuinely exaggerating, possibly to fit in with the crowd or their loser friends. I have the balls to tell people that plane food rocks, and that it is made with as much care and attention as other production facilities whether it be a small restaurant or a large diner.

Yesterday I received a large package at work. Last Thursday, I co-incidentally received the usual email from Firebox.com, one of them websites where if I had all the money in the world, I would buy one of everything on that website. I usually have a quick skim though the email, laugh at some of the stuff in it, and then trash it. This time was different.

The Portable BBQ caught my eye. To date, I have been to two BBQ’s and summer hasn’t even hit full flow. The problem me and my friends have is that we use the disposable BBQ’s, which last about 30 minutes at best and is no-where near enough time to cook meat for the amount of people that turn up. The portable BBQ was £20 with free delivery, and it folds up into a thin briefcase-esqe carry case containing the grills inside.

Well that was a no-brainer. Ordered.

Two days later I logged on to Firebox to look at the BBQ again – and it was sold out. Love it, just in time for the Royal Wedding pissup/BBQ on Friday. Note: I don’t give a flying shit about the wedding, we’re just using it as an excuse to drink and have a BBQ.

Photos below for your enjoyment.

Windows 7 about to top Windows XP in market share: Get the HINT?!

Well it’s about fucking time. We all know that Vista bombed, and that many – if not the majority of users that actually knew how to use a computer preferred to stick with Windows XP – which at the time is understandable.

But then Windows 7 came out, it was a massive jump from Vista. Largely re-written, it was fast (faster than Windows XP), secure and ran smoothly. I had made the unfortunate mistake of buying a Macbook Pro (which was not the problem) for it’s hardware build and quality, which as most people will know, does not come with Windows but OS X (this was the problem). By this point I had been using Windows 7 for around a month… then made the switch to OS X.

What a difficult transition. Windows 7 had effectively fixed everything that everyone hated about Windows XP and Windows Vista (especially). This time they listened to what the users wanted, not to what they thought was correct – and it payed off. The result was a fast, slick sophisticated operating system that had very little problems and actually just stayed out of your way. Users don’t want to be nagged, they don’t want to be bothered. They just want to do what they need to do.

What I can’t, for the life of me, figure out is why some people are still using Windows XP. Why? Are you scared of upgrading? Do you have  a love/hate relationship with the operating system? Does Windows XP provide you with a comfort that no man or woman can match up to? Is Windows XP the abusive relationship that you know you need to get out of, but just can’t turn your back on for reasons that you can no longer remember? Windows XP is a 10 year old operating system, it’s been around now for a decade. People are complaining about being infected with viruses, malware and spyware so easily – and they complain and bitch about Windows XP. The answer lies right in front of you, you’re using an operating system that is a decade old.

If you’re using Windows XP, do yourself a favour and fork out the cash for a shiny new Windows 7 disc. Stop being subjected to dodgy software that you don’t know how it got into your computer. Stop being subjected to malware and spyware that are stealing your credit card details, your identity and your passwords. Stop using an operating system that is horribly outdated. This month, Windows 7 is poised to take the top spot in market share for the first time since Windows XP, surely – this must say something about the vast improvements, comfort and security that is now available to you.

Don’t suffer any longer. And stop whining about Windows XP.

Enjoy this educational “Meanwhile, in…” edition of Demotivational Monday! 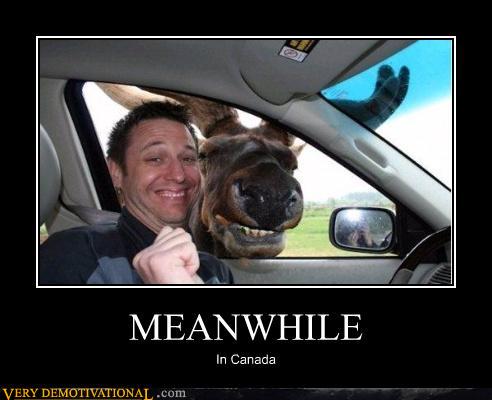 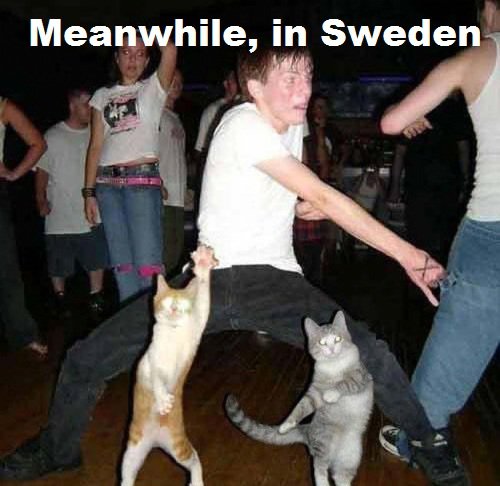 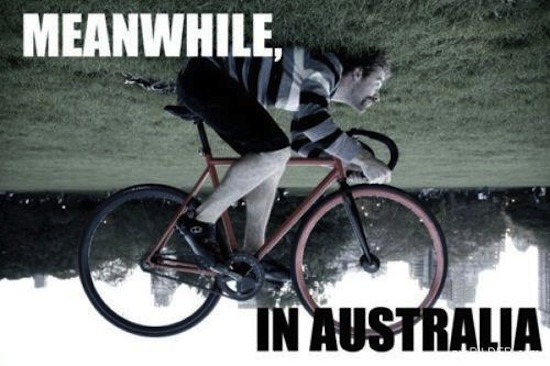 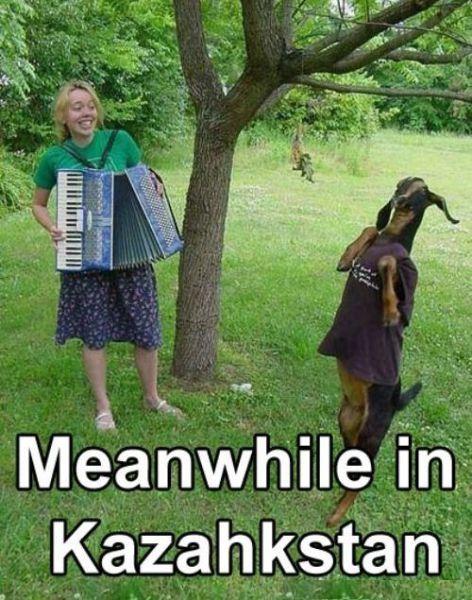 I Am Kio.
Blog at WordPress.com.